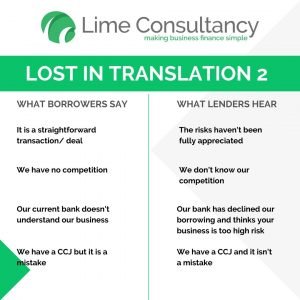 I have written previously about why borrowers and lenders see things very differently, it is a glass half full or glass half empty scenario. What makes things worse is that the narrative and language used by a borrower and a lender is often the same, but the meaning or intention behind it is very differently understood.

It is a little like having a friend who tries to convince you to do something with the argument of ‘what have you got to lose?’, the real answer is often ‘quite a lot’ rather than their view that you have nothing to lose.

With that in mind, let me start with;

For a business that does something every day, what they do can become run of the mill. Akin to surgeon telling you your routine operation is standard and straightforward. For them it may be, for the rest of us it is anything but straightforward and it is fraught with risk. 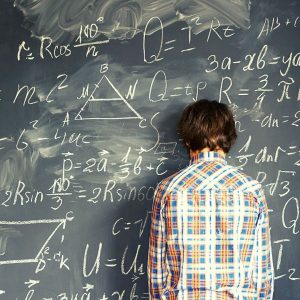 Think of your business from a layman’s perspective. Even if you think, or know, it is simple then don’t miss out mentioning a few risks that you have already addressed or got covered. They will be there so don’t brush them aside, share them with the lender as it endears confidence in what you want to do.

The phrase of ‘we have no competition’ is heard by a lender as ‘they don’t know their competition’.

Just because your competition is not a shadow of what you do doesn’t mean that there isn’t competition. I once had a business that provided amazing German engineered bathrooms, these bathrooms were amazing and I genuinely believe nobody could compete with the quality. Whilst they believed they had no viable competition in their target market, it was mentioned to them that the buyer could always keep the bathroom they had, doing nothing then became the competition.

However you wrap it up and present it, always have competition.

It happens. Not often, but it happens. Lenders never believe a CCJ or any defaulted credit is an accident. Arguing otherwise is a big job and whilst you can win the argument sometimes it is better to raise it upfront and accept that some lenders will work with you and others won’t.

When it comes to credit issues and CCJs, lenders start from the position of you being someone who lets people down, someone who cannot be trusted to repay them.

To avoid the lost in translation risk, get your story straight, get your records together and talk about it. Even though a lender (and banks are good at this) will nod and appear to buy your explanation of it being a mistake, they don’t so please don’t assume they have.

For any help in raising business finance then let me know and happy to help.