And why it matters to you…

There is always media coverage and perception of what is going on when it comes to lending, ‘borrowing’ and ‘debt’. We see coverage of what lenders are doing and how it can be difficult to borrow, easy to borrow or that mortgages are possible or impossible.

The truth is somewhat different.

Forget the hyperbole of the 6pm news. When it comes to lending the main influencer remains the level of default and risk among lenders, how much they expect to lose and how they will react as a result.

The latest Bank of England report shows the figures, which make interesting reading (interesting to me that is) but it does matter to you, I promise.

The credit crunch saw the biggest shake up of lending in a generation. In theory, a global pandemic should have proved a much bigger impact, however it hasn’t.

One of the main reasons for this is the stability of UK banks now, compared to how they were in 2008: 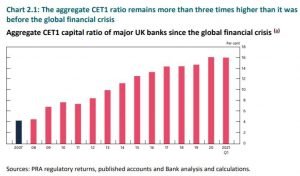 For CET1 read ‘liquidity and strength’. It shows that the major UK banks are almost three times stronger than they were in 2008, there is not the same level of exposure or risk they won’t meet their obligations.

The flip side is then ‘why is borrowing harder?’, that may be down to what is yet to come.

Banks report the level of certainty they have that borrowers will repay. As borrowing deteriorates this is reported to the Bank of England, this chart shows how this has changed since the pandemic: 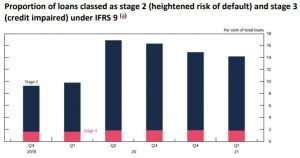 There is a downward trend and there is some evidence to support this continuing, however banks are typically a glass half empty bunch so expect caution for some time to come.

When it comes to borrowing one of the highest profile areas in the media is mortgage lending. There is no doubt that the impact of 2008 and the changes that followed may have worked, the changes and increase in regulation that followed 2008 was designed to prevent a recurrence should another major financial event occur. Which it did. 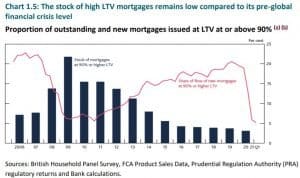 This chart shows the level of home mortgages at or above 90% loan to value (LTV) on the blue bar. You can see the trend downwards as LTVs were restricted post 2008. Whilst the red line shows that since the credit crunch LTVs started to move upwards (good news for buyers), the reaction upon Covid was to reduce LTVs immediately (bad news for buyers).

What happens next will be determined by what level of default is seen as the world returns to some new normal.

This leads us to looking at where defaults are considered to be: 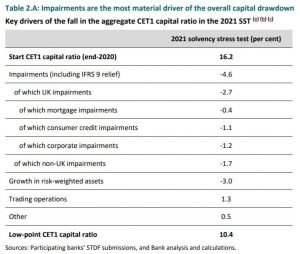 When we look at where the ‘risk’ sits within the major UK banks you can see that at 0.4%, mortgage impairments are one of the lower areas of concern. At 3%, one of the biggest areas of concern is among risk-weighted assets. In laymen’s terms, how good is my security? Concerns over the value of commercial property and a permanent change to working habits impacting on the value of city centre offices will impact here. The flip side is that this can be a short term thing

For the average business or personal borrower there are figures here to take encouragement from, there are signs that the flow of money will ease, my hope is that as that eases it won’t be overly reigned in by interest rate rises.