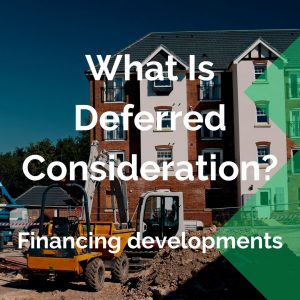 What is Deferred Consideration?

The concept of deferred consideration is quite straightforward in that a fixed sale price has been agreed between buyer and seller with part of the price is not being paid at completion, it is instead deferred until a later date. The consideration given for the purchase has been deferred.
It may seem like something that occurs once in a blue moon but it is more common than most people realise, especially when it comes to property developers and purchasing property to be developed.

For many developers the use of deferred consideration works really well. Think about it.

The challenge comes with financing this type of development deal because the ownership isn’t straightforward, but it can be done.

Let me give you an example of how this works:

Traditionally the developer would be putting in his own cash on day one and financing the rest.

The use of deferred consideration isn’t for everyone and not every seller wants to wait until the end to get their money, but where both parties agree it can work well. Plus, you can finance this type of development structure so don’t be put off.

If you want more details or you want to see how to finance your development project then get in touch.